Kickstarter comes to the UK

Fan based funding website Kickstarter has launched in the UK

The famous US based charity site, on which companies, organisations, musicians and more, seek funds for creative or product-based ideas. The site has so far raised more than $340m (£211m) in funding for fledgling ideas and projects – with 5% of each successful pledge going to Kickstarter.

“The request to expand internationally has long been one of our most requested features,” Mr Strickler, who is the site’s head of community, said.

“We certainly are interested. We’re going to see how the UK launch goes and figure out the next moves from there. There’s a lot of places that will be interesting.” 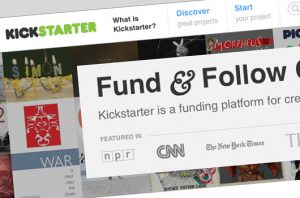 kickstarter come to the uk

Businesses or individuals pitching on the site typically offer arange of perks in return for money. Pledges can be anything from £1 to thousands of pounds.

More details on this story can be found on the BBC News website here or via the Kickstarter blog here.