Yesterday it was an honour and privilege to receive recognition from The Heath School in Runcorn, Halton to certify MakoEducation as a “Learn 4 Life Champion” for 2012. The certificate was presented to us for our digital media workshops that we undertook with a group of 54 young people during the schools Education Enrichment & Life Opportunity Program at The Heath Business Park.

The program was designed to give students an insight into various careers and opportunities that exist in the world today: 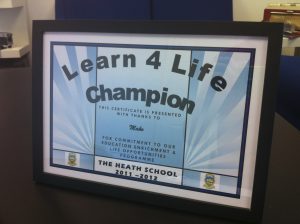 From civil engineering to a career in medicine, the aim of the course was to better equip the young people to make the right decisions on what path they choose at school, further education, or in other life choices. MakoEducation ran two workshops that outlined the methods and technologies that are used in modern media production for movie making and audio production:

The Workflow of a Digital Film Maker

This workshop outlines the basic principles of film making today, starting with conceptualisation, to scriptwriting, basic camera movements and storyboarding. We then demonstrated the process of using a simple storyboard to structure a basic video shoot, then capture the acquired footage and piece it together in a short sequence within Final Cut Pro on the Mac. Students received a greater understanding of the film making process, while also getting hands on with the industry standard cameras that we use on a daily basis for commissions with MakoMedia. While the short film they created in this one hour session probably won’t sell out in movie theatres any time soon, it certainly gave the students a greater understanding of what goes into the movie making process.

More information on our video based workshops can be found here: MakoEducation’s Video Workshops.

This workshop demonstrates the creative and technical world of foley sound design and digital sound engineering. By highlighting the basic role of a foley artist, the students gained a greater understanding of the preparation and post production that goes into creating audio tracks on everything from adverts, to music videos, right up to big budget hollywood blockbusters. Students got hands on with the industry standard equipment that we use on a daily basis for recording with MakoMusic, to capture live sound and foley effects using their vocals and sounds props to enhance the given video on the big screen. Students had to recreate the sounds of footsteps, sword fights, breaking bones and beating drums using various recording techniques and their imagination.

More information on our audio based workshops can be found here: MakoEducation’s Audio Workshops.

All the students from The Heath School were extremely well mannered and genuinely interested in taking onboard what we had to say. It was fantastic to be able to speak with the students on a one-to-one basis after the sessions to hear about their plans for careers in digital media, and it was great to be able to offer them as much impartial advice as possible. I think it’s safe to say that all parties had a great time and we look forward to seeing them all again soon.